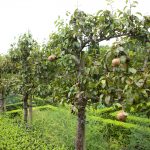 Isn’t it wonderful to have fruit and nut trees in your yard? It sure is. They are great resources, and it is just great to think that you harvest their yield in your yard. Fruit-bearing trees need to be trimmed regularly to help it produce abundant harvests, enhance its growth, and support its health. You should know the following things about fruits trees, to ensure that you are giving the right care your trees deserve.

Pruning trees, especially the fruit-bearing ones take constant practice. The process is both science and art that is why it requires the right knowledge backed with experience to get the job done right. Remember that not all types of fruit trees are the same. Each type requires a unique way of pruning to address its need for sunlight and growth patterns.

Arborists use three methods when pruning fruits trees. The first approach is the natural-habit system which is ideal for citrus, fig, and pomegranate. Another technique used is the central leader system where the tree is shaped with a tall center trunk. Trees that use this method include apple, cherry, pear, and pecan. The last method is called the open-center pruning which means the center leader of the tree is cut short. Tree service companies suggest the open-center approach for fruit-bearing trees like plum apricot, peach, and nectarine.

When you see any dead or diseased branches in your fruit and nut trees, trim them away immediately. Don’t wait for the right season to correct the issue because not addressing the issue can lead to your tree’s death or damaged property due to fallen limbs.

For healthy fruit and nut trees, they can be pruned during their dormant season. They have dropped their leaves and have not yet formed new growths for the coming spring. It is ideal for pruning fruit tree form early January to mid-February. Don’t wait too long before pruning your fruit tree because of the risk of pest infestation and diseases in the wound of the pruned branches.

Trust an Expert to Trim Trees The Proper Way, At the Right Time

When you are unsure of the right way to prune your fruit and nut trees, don’t attempt to DIY the process or you will put your tree at risk of declining its health. A certified arborist is the best person to turn to when you have questions about trimming. They have the experience and the right skills to take on the job. A lot of tree species bear fruit in the latter part of the year, so it would benefit your trees if they get pruned by an expert.

One myth that we wish to debunk is that the more branches the fruit tree has, the more fruit it will yield. Because of this wrong idea, they neglect to trim and hope for more fruits. It can be true that they will produce more fruits but they can be small, and they will get energy from the tree more than it can give which can lead to health issues.

Love Thy Neighbor: What to do When a Tree Falls on a Neighbor’s Property

As a homeowner, you may have more than one tree on your yard. They come in different sizes and shape some can even be excessively large for what is allowed in a landscape. Although trees can be an excellent addition to your property because of the natural shade they offer and the aesthetics they give, they can also endanger your property or worse, your neighbor’s house.

A tree is likely to topple if it is not well maintained or it is diseased or damaged by a storm. When the tree falls onto a neighbor’s yard, the first question that comes into the mind of the homeowner is whether he is liable for it. The easy answer is yes, but this is not always the case.

If a tree falls onto a neighbor’s house, he should file a claim to his insurance provider right away. In most cases, his insurance company will cover the damages, especially if the tree fell due to natural events. One scenario to explain this is when a hurricane uproots a tree. In this case, the insurance company will be liable for the repair costs. However, there are still instances where the homeowner will be responsible for the damage. For example, the tree falls over the roof of his neighbor’s house while he was trimming it; the homeowner would be liable for it. Also, if the homeowner knew that his tree is diseased or dying but didn’t take proper action, he could be responsible.

Most often than not, insurers don’t need to pay for the damages because the cause for the damage is usually due to healthy trees falling over because of acts of nature. But some neighbors may still file a lawsuit to try to compensate for their losses. The best way to prevent any of these situations is tree maintenance. Have a qualified tree service inspect the health of your trees regularly and allow him to treat any diseases, if necessary. As the old saying goes, “prevention is better than cure.” The same rule applies to trees. You don’t have to deal with damages or repairs if you keep your trees healthy in the beginning.

Don’t try to analyze the situation on your own, instead seek help from the professional. A certified arborist will be able to tell you if tree removal is necessary or if there are other ways to deal with the situation. Hiring a tree expert is less expensive than having to pay for repair or legal costs a fallen tree could cause.

If unfortunately, you find yourself in a situation where you have a fallen tree in your property, seek legal assistance from an attorney who has a background in the type of issue you have.

It is a sad truth that some deaths of famous personalities are attributed to drug abuse, such as the case of Prince. According to the Center for Disease Control, two million Americans abuse the use of Morphine, Fentanyl, and Oxycodone. Over the years, the number of people getting addicted to drugs is significantly increasing. Drugs can be very addictive that users will do everything to get one.

Certain drugs are used for medicinal purposes. One example is the Opioid painkiller, Oxycodone which is prescribed to make an injured person feel better. Abuse of the substance will happen if he or she no longer needs the medicine but still takes it for use or sells it to other people addicted to it. The person can also get immune to the medication which will lead for him to need higher doses which can cause accidental overdose. If, after the prescribed time of use, the person still uses the drug, he will be tolerant of the drug.

In other cases, people who are addicted to Oxycodone go to a different doctor once they no longer get prescription from their previous doctor, this way they can get the pill legally and use it or sell it to others. When they can no longer get the prescription from doctors, this is the time they turn to buy drugs on the internet or in the streets. Other drug abusers opt for the cheaper choice, heroin. If the person can no longer afford to buy the drugs, he may resort to doing illegal things such as stealing to get what he wants. It then becomes a sad and vicious cycle of drug abuse.

In most states in the U.S. peddling of drugs or possession of it will account for being arrested and paying fines. You will also lose your driver’s license. Depending on the type of medicine and the amount seen in your possession, prison time can be for a year or a lifetime. There will be a required drug test and counseling for the arrested. In the state of Florida, if you are caught possessing 5 grams of Hydrocodone, you can be charged with three years of imprisonment. If you’ve been found with the same grams of marijuana, this equals a penalty and a fine and is typically tagged as a misdemeanor and not felony.

People who are addicted to drugs can make desperate moves to get what they want. The following are some signs to watch for to know if a person is addicted to painkillers:

If you or any of your loved ones gets arrested for drug abuse or drug trafficking, you should call a reputable and trustworthy bail bonds company who will help you get out of jail as fast as possible. This bail bond company should be empathetic and set aside prejudice to help their clients get out of prison quickly. 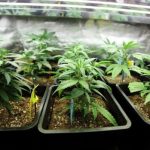 If you’ve been charged with drug manufacturing, you will need to settle fines and custody. In this case, it is crucial to get yourself out of prison immediately so you can prepare for your court hearing with the help of a lawyer.

What are Schedule I Drugs?

Certain drugs are used for medical reasons such as schedule III drugs. However, there are types of drugs like the schedule I drugs that are not used for medicinal purposes because of the potential danger it can bring. People who use such drugs can be addicted to it and abuse its use. The severity of the charge depends on the type of drug used. In some states like Ohio, creating meth is a felony crime, and the convicted should serve at least three years of prison time.

Can I be Arrested for Growing Marijuana in my Home?

In some states, the use of marijuana as a medical tool is welcomed. However, there are particular states such as Ohio where you will be charged if caught growing marijuana in your property. You can be charged with felony and time in prison.

How Much is Bail for Manufacturing Drugs?

There are certain factors to be considered for setting the bail amount for drug manufacturing. Bail amounts are not the same across all charges. Bail will depend on the type of drug manufactured, the cost and the number of offenses the person has committed. If you get caught with the possession of a weed plant weighing less than 100g, a bond may be unnecessary, but you will be fine for a misdemeanor that typically costs $150. However, if you are caught with 40 plants, you can expect for a much higher bail amount.

How do Bail Bonds Work?

A bail bond is offered by a bond company that is being taken care of by a bail bondsman. The judge is typically the one who sets the bail. If the arrested person cannot provide the amount, he then goes to a bail guarantor who can handle the bail. In most cases, the convicted should pay the bond company 10% of the total bail amount.

Why Are Bail Bonds Set?

Bail is an amount of money set by the court to ensure that the defendant will return to the court during his or her court hearing. Once the bond is posted, then the defendant can go home and prepare for his future court proceedings. If the defendant fails to return or show up in court, the bond company will be the one to pay the bail amount.

Bail can be paid in cash, however, most often than not, they are set at a high amount, that defendants cannot pay them on their own, so they go to a bail bond company.